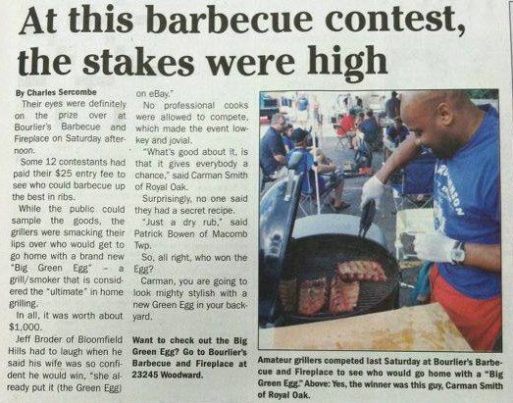 at the beginning of what promises to be a long, cold winter, i smiled as i thought back to the warm summer days of not so long ago, and the memory of my son in law, carman smith, (also affectionately renamed the rev bbq by me), as he won the local rib grill-off.

he was humbled and elated when he took the title and what better prize than a new grill?  while he mans the grill, he’s always ready with a few kind words and some homespun advice.  as carman says, ‘it’s the rub, not the sauce,‘ and i have to believe him.  i’d say it’s an all around winning combo, and obviously others agree with me. as a mother in law, i’m ready and willing to taste it all, as he masters his grill art and keeps dispensing his words.  next up – brisket! bring it rev bbq. 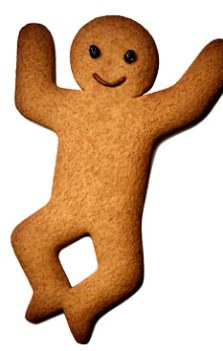 Just a few days before our Winter break, I made a quick stop at the store on my way home from school.  To celebrate the season with my class, I bought all the colorful fixings needed to make gingerbread man cookies:  cookie mix, cookie cutters, red hots, candies, and frostings.  As I left the store and hurried across the busy parking lot to my car, I heard people behind me yelling out. I turned to see what all the excitement was.  Apparently, my bag was so full that one of the gingerbread man cookie cutters had fallen out and was lying in the driveway, right in the path of a heavy truck. The group on the sidewalk were yelling at me to go back, and to the approaching driver to stop, before he ran over the gingerbread man.

In response to their waving arms and jumping and loud voices, the truck slowed down and swerved just in time, missing it by a few inches. I smiled at the driver and retrieved my wayward, but intact, cookie cutter. After witnessing the close call and seeing the happy result, the crowd broke into spontaneous applause as I picked him up and I thanked them for caring.  Walking back to my car, I was reminded once again, of the inherent kindness that people carry around with them. This random crowd of people had taken a moment from their busy lives and long days to jump in and join together in an impromptu rally save this cookie cutter, as if it were an innocent kitten in harm’s way.  These little gestures in life clearly speak the loudest.

At school the next day, before making our cookies, I read the Gingerbread Man story to my class and told them about the near-miss experience that had occurred  just the night before.  Upon hearing this, one bright child offered an alternate explanation for how the the close call really came to be.  He wisely suggested that of course it hadn’t fallen out of my bag, but probably had tried to run away, just like in the book, and almost got run over in the process.  What a much more exciting and wonderful explanation this was! 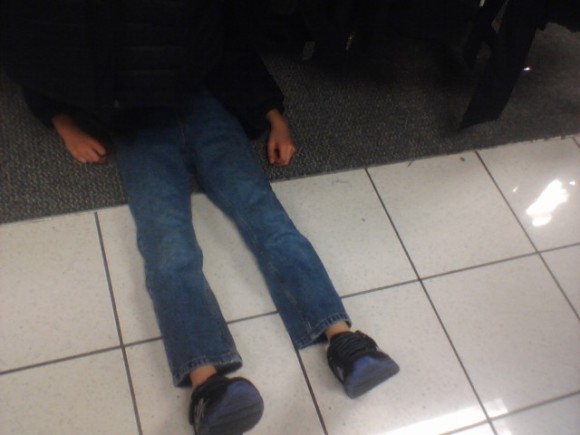 as i see and hear never ending tales of agony, mayhem, and extremely bad behavior – all associated with the infamous ‘black friday,’ i am always surprised, for i see it from a totally different perspective.  each year, i look forward to the phenomenon, have a wonderful time in the process, and this year was certainly no exception.

filled with lots of turkey and family thanksgiving cheer, i flew into a store in the wee hours of friday morning and quickly found what i was looking for – a prized pizza stone, heavy enough for my son-in-law to put on his grill. somehow it seemed much too easy.  with this early and painless success, i looked for the checkout line and walked to what i thought was the end, only to find it had taken on a life of its own, and actually snaked all the way around the interior perimeter of the store. now this felt more like it!  let the adventure begin –

in front of me, was a woman, with her mother, discussing the merits of waiting in line vs. abandoning the idea and moving on, hoping for less wait time somewhere else. as we were stuck in close proximity, after just a short time together, we banded together suggesting that mom could perhaps walk around the store, looking for one last thing, while her daughter held their place in line. early crisis averted, we continued to stand together.  as more time passed, i also noticed the amazing strategy of the woman behind me.  she had a store cart without much in it, yet as we continued to stand, she came and went, every 3 minutes, and over time, found everything on her her entire christmas shopping list, all while we stood in line, still waiting. at this point i also had to laugh at myself for choosing, of all things,  a heavy ‘millstone’ to stand in line with for such an extended period of time.

as still more time passed, people shared pictures of children on their phones, along with coupons and stories and tips for other ‘deals’ at other locations, people made coffee runs for new friends in line, and phone calls were made to reassure those waiting in other places.

as yet even more time passed, and in the perfect gesture of what  it must have felt like to be a child waiting so long, i noticed set of legs, just laying on the floor, sticking out into the aisle, from underneath a clothing rack ahead. my new friend in front of me let me borrow her phone to snap a shot of this, as i loved the visual. this child had clearly reached his limit and was expressing it the only way he knew how.

when he emerged, he asked me 2 questions:

i smiled and told him i had no idea, but knew he was at the point where time and space must have lost all meaning and he was beyond tired of waiting.

Perhaps there is no agony worse than the tedium I experienced waiting for something to happen.

The important thing about learning to wait, I feel sure, is to know what you are waiting for.

Chinese practitioners have understood the concept of standing still/waiting for many years: We’re so used to the idea of ‘doing’ to be effective that standing still and doing nothing sounds rather strange. But, according to zhan zhuang qigong therapists, simply ‘stand like a tree’ qigong is that the less physical movement you make, the easier it is for your chi (or life force) to circulate freely round your body.

‘Standing meditation is one of the fundamental training methods of internal Chinese martial arts,’ says Yang Yang, founder of the Center For Taiji And Qigong Studies in the US and author of Taijiquan: The Art Of Nurturing, The Science Of Power. ‘Practitioners hold standing postures to cultivate mental and physical relaxation, tranquillity, awareness and power. The Chinese call it zhan zhuang or standing pole, while the t’ai chi form is called moving standing pole.’

There are various theories about its origins, but one of the earliest descriptions of standing pole comes from a Chinese medical textbook written sometime around 403 to 200BC. ‘One theory is that it is one of the oldest exercises in human history,’ says Yang. ‘Prehistoric man had to stand perfectly still for long periods when hunting. It is an interesting thought. I have had deer, coyotes, birds and foxes pass close to me while I have been standing.’ ‘Standing meditation flies in the face of most of our ideas of how we think exercise ought to be,’ says Sam Moor, who teaches t’ai chi in Brighton and Chichester. ’According to t’ai chi practitioners, standing meditation teaches the body to use muscles in what he calls a ‘postural’ way (to hold a posture), rather than a ‘phasic’ way (when a muscle is used for movement).  It may be hard to believe that all this could come from simply standing, but, in the words of the ancient Chinese, ‘If you do not practice stillness, you will never truly know the miracle of movement’.

what a bonus! i had unwittingly completed an intense round of martial arts training! in the end, it wasn’t the joy of moving to the front, checking out at last, and knowing i had saved $10 on a pizza stone that really made me feel good, no, what really made my day were the human encounters and experiences i had while standing still and waiting.

upon arriving home and sitting down, i read my newspaper horoscope:  ‘in spite of the bustle of the world, you feel a human kinship. you regard your fellow travelers as partners, whether they happen to be family, friends, co-workers, or total strangers. ‘