Duane travelled down Missouri River and broke the record on his 60th birthday on August 27th.

“There are three things I’ve learned never to discuss with people:

religion, politics, and the Great Pumpkin.” 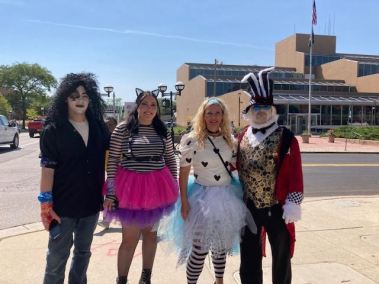 walking through the city 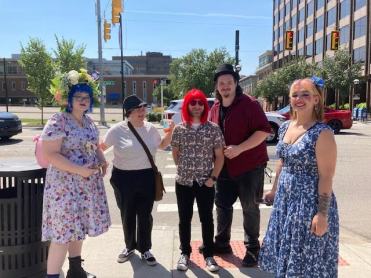 a lot of people

than the usual weekend attire 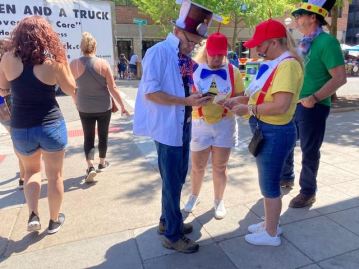 how fun to discover

that people from all over

of all ages and stages

had come to town to be part of

an ‘alice in wonderland’ immersive experience.

also fun to imagine them crossing paths with the families

dropping off their child at the uni

visiting our city for the first time.

“this wasn’t in the brochure.”

“do you think they’ll be safe here?”

and this was only day one.

“when I used to read fairy-tales, I fancied that kind of thing never happened,

and now here I am in the middle of one!”

carrying it wherever they go

it’s move-in weekend at the uni.

“the sweetest part of leaving home is knowing,

beyond the shadow of a doubt,

that you’ll always carry it with you.”

just got my license plate renewal notice in the mail

wish i could get this one.

A rare, first-of-its kind Chicago license plate, ‘the holy grail’ is up for auction

A black-and-white aluminum plate stamped with just the single numeral “1” gives bidders a chance to earn a piece of automotive history. The plate was made in 1904, the first year that Chicago made metal license plates, and the only year the city made plates from thin, stamped aluminum.

“Only a handful of these were made,” said Mike Donley of Donley Auctions. “And it’s number 1. It doesn’t get any lower than that.”

Before Illinois began making statewide license plates, Chicago issued its own plates between 1903 and 1907, Donley said. From that era, auctioneers said, those made in 1904 are the rarest. For the next few years that followed, the flimsy and damage-prone aluminum plates were replaced with heavy-duty solid brass. Even more rare, this plate is graded “VG,” or very good condition.

This particular plate was issued to prominent Chicago lawyer and art collector Arthur Jerome Eddy, who in 1900 became the first person in Chicago to receive a license badge for a motor vehicle. Before plates were distributed, license badges, meant to go on drivers’ coats, were issued to drivers as a way to tax city residents for funding road projects, Donley said.

Eddy was an early adopter of automobiles, Donley said. He set an auto distance record in 1901 by driving 2,900 miles from Chicago to Boston and back over two months, The New York Times reported. He even published a book about it the following year — one of several he authored — titled Two Thousand Miles On An Automobile.

Eddy also helped found the Chicago Motor Club in 1902, to advocate for driver rights and promote safe vehicles and roads. That club has since evolved into the American Automobile Association (AAA). He’s also credited with putting Chicago on the map of the modern art world, according to auctioneers, by drawing interest to the Art Institute of Chicago.

More recently, this plate belonged to Lee Hartung, a well-known collector of motor vehicles, who died in 2011. Much of his personal collection was auctioned off years ago but, when his partner was preparing to sell their house, she found a stash of more auto memorabilia — including the No.1 plate.

Donley estimated the plate will sell for around $4,000 to $6,000 at the auction, which ends today. But the intrigue it has garnered could hike up the bids. The auctioneer took the plate to a license plate show over the weekend, where he said the item attracted collectors from out of state to see the plate and gauge its authenticity. “There’s a lot of interest in this,” Donley said. 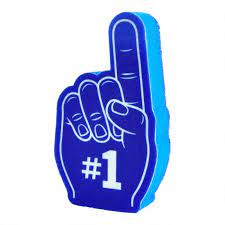 as close as i can come, is owning this foam fan finger

“you have to be odd to be number one.” 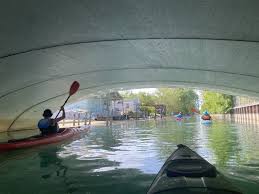 that i never knew existed 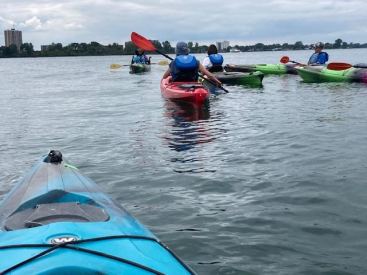 then paddling into the detroit river

bounded on either side by the united states and canada

learning history and tales of

finishing with a lovely relaxed dinner

at coriander kitchen and farm

all in the heart of the city.

“if there is magic on this planet, it is contained in water.”

so welcoming, jovial, relaxed, and natural

Italians use the expression ‘al fresco’ to mean ‘in the chill’ or ‘in the cool’. For example, when they want to convey keeping things in the right places, they’d say ‘keep the cheese al fresco’. But these words also have another meaning. When tourists in a restaurant are wanting to eat outside, they usually say they want to eat ‘al fresco’. In Italian, the expression, ‘Al fresco’ literally means ‘in prison’. The reason for this may be because in the past, prisons were very cold places with thick walls (‘fresco’ means ‘cold’). So, don’t be angry if, when you say: ‘I’d love to eat al fresco’, the waiter laughs, because you are actually telling him: ‘I want to eat in prison’. Instead what you need to say is: ‘Vorrei mangiare fuori’ or, ‘I’d love to eat outside’. Note it to remember it for your next Italian trip, and let the waiter know that you want to eat in the open air and not in prison.

“seating themselves on the greensward, they eat while the corks fly

and there is talk, laughter and merriment, and perfect freedom,

for the universe is their drawing room and the sun their lamp.

besides, they have appetite, nature’s special gift,

which lends to such a meal a vivacity unknown indoors,

however beautiful the surroundings.” 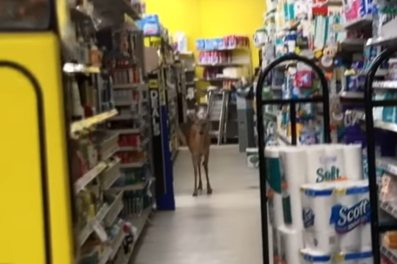 Shoppers were joined by an unexpected patron Friday when a female white-tailed deer wandered into the Dollar General store in Jackson, Michigan.

“I was shopping and I heard a commotion coming from the front of the store,” said Connie MacGuinness, a customer in the store at the time. “I heard people calling out ‘Oh no!” MacGuinness turned around to see the deer walking straight toward her down the aisle, she said. “I was stunned for a quick minute, then got out my phone.”

A report of the animal’s escapades reached the Jackson Police Department. Police and Fire Services Director Elmer Hitt said within a few minutes, officers from JPD and Jackson County Animal Control arrived to help lead the doe back out of the store. “It seemed as scared as we were, but it didn’t run around or seem upset,” MacGuinness said.

Another shopper told MacGuinness they saw the deer walk into the store through the open sliding door at the front of the building.The deer was in the building for about 20 minutes before police guided it outside an open door by barricading the aisles with boxes and carts.

*note: my personal theory is that rudolph had a lot of shopping to do,

hoped to beat the black friday crowd in november,

wanted to fly under the radar, and stock up on some good deals.

unfortunately rudolph is now such a celebrity

that it’s hard to be out in public

without being noticed and posted about on social media. – beth

“i’m like rudolph the red-nosed reindeer. if i’m not ready, the sled isn’t going to go.

one of the greatest outdoor amphitheaters ever, and still rocking.

i’m sure you can pick me out here,

early 70s, where i saw my first live concert, Focus, performing their one hit, “Hocus-Pocus.”

The award-winning theater was christened with a matinee concert by teenage heartthrob David Cassidy on June 25, 1972 (a few days later, old-school crooner Andy Williams and Quincy Jones hosted a five-night run at Pine Knob to mark the occasion). It was the largest venue of its type in the country at the time, currently able to accommodate 15,000 patrons.

A couple of weeks later, the first rock concert at Pine Knob forced the police to shut the place down — a sign that Clarkston’s new venue had a little something for everyone.

When the James Gang rolled into Pine Knob that inaugural summer, an estimated 25,000 “young people” tried to storm the venue. That’s according to a report in the Detroit Free Press, which noted that the rest of the “hard rock” concerts scheduled for that summer would be canceled after the ruckus. That included an upcoming show by Detroit’s own Bob Seger, who would go on to play more than 25 sold-out shows at the venue over the years.

Maybe you were at that show, or the more than 3,000 other concerts that have taken place there. Thousands have made memories at Pine Knob over the years, whether blurry-eyed ones from the top of the hill or once-in-a-lifetime front row experiences from within the comfort of the pavilion (which, admittedly, could’ve been blurry-eyed, too).

When Pine Knob changed its name to DTE Energy Music Theatre in 2001, it was those memories that kept the original name alive. Even the bands that played there and recorded live albums there called it Pine Knob. “It’s always been Pine Knob to me. I always call it that from the stage,” Peter Frampton told Billboard earlier this year. “I am really happy Pine Knob’s true identity has finally been returned.” (Frampton recorded his 1999 album Live in Detroit at Pine Knob.) For its 50th anniversary, new sponsors made the wise move to tap into that well of nostalgia by bringing back the original name and some of the retro aesthetic to the signage and logo.

“you create a community with music, not just at concerts but by talking about it with your friends.”

“if you never tasted a bad apple, you would not appreciate a good apple.

you have to experience life to understand life.”

i feel pretty sure this method will be the winner!

Notes: TYROMANCY: The use of cheese as a divination tool was known in the ancient world and the Middle Ages, although the details aren’t very well-recorded. Some say the shapes of the holes in the cheeses were thought to hold meaning—a heart shape could indicate love, and certain holes could be read as initials. Women in the countryside would predict future husbands by writing the names of suitors on pieces of cheese. The first to mold was believed to be the ideal mate. It may be worth noting, however, that the Greek diviner Artemidorus did not feel that cheese divination was very reliable, and included cheese diviners among his list of “false diviners,” alongside dice diviners, sieve-diviners, and necromancers. (The interpretation of dreams and livers was far more dependable, he felt.)

“i pondered what else I should take for him. flowers seemed wrong; they’re a love token, after all.

I looked in the fridge, and popped a packet of cheese slices into the bag. all men like cheese.”