what an elementary teacher

all full of colors, sparkling water, and clever words.

creates a beautiful and comfortable bed

for the rhino with the broken foot

so that he has a place to lie down

and recover in peace.

“as great scientists have said and as all children know,

it is above all by the imagination

that we achieve perception, and compassion, and hope.”

i really enjoyed a relaxed game night with

a group of long-time friends

a couple of grandies

all have their challenges

and one thing in common

they love being with the people they love.

“old dogs can be a regal sight.

their exuberance settles over the years into a seasoned nobility,

their routines become as locked into yours

as the quietest and kindest of marriages.

today is my father’s birthday and he’s gone now, but never forgotten.and whenever i see the show, ‘mad men’, i think of him. the look, the feel, the era – that was our life growing up. we lived in the twirly, swirling world of advertising.

my dad, in the left forefront, in a very important lunch meeting

we had cocktail parties at our suburban detroit house, hosting automotive clients and friends and all sorts of interesting characters. there were martinis and dresses and canapés and jazz and laughs long into the night. i once saw him put on a horrible wig and wear it like nothing was unusual, just to get a reaction. we would sneak down in our pajamas and sit on the stairs, just to be a part of all the hullabaloo.

on regular nights, we were always pitching ideas to him around the dinner table and suggesting…

—
“the final forming of a person’s character lies in their own hands.” 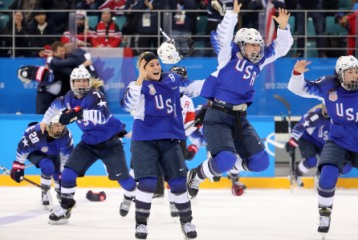 —
the U.S. women’s hockey team pulls off their own miracle

at 2018 Winter Olympics by beating Canada in a shootout for the gold medal.
—

“if you don’t try to win you might as well

hold the olympics in somebody’s back yard.”

kinders climb up high to do the dishes

after a busy morning spent baking.

“sometimes you need to give dishes a nap.”

one of the bonuses of being a kindy teacher

is that i always have a snack at the ready

should anything happen along my way home.

the road to enlightenment is long and difficult,

and you should try not to forget snacks and magazines.

there is so much strength and emotion

packed into this 70 minute little film

i am left not knowing exactly what to say.

yet larger than life

their fight for survival

and their desperate search to find a way

to open their wounded hearts once again.

it is a testament to the resilience of the human heart

and the power of love and friendship in the face of adversity.

(French: Ma vie de Courgette; also titled My Life as a Zucchini), was screened in the Directors’ Fortnight section at the 2016 Cannes Film Festival. This is the second adaptation of Gilles Paris’ 2002 novel Autobiographie d’une Courgette, as there was a French live-action television film adaptation called C’est mieux la vie quand on est grand which aired in 2007. The film was nominated for the Best Animated Feature Film at the 89th Academy Awards but lost to Zootopia. It was also selected as the Swiss entry for the Best Foreign Language Film at the 89th Academy Awards, making the December shortlist.

“the empty swing set reminds us of this–

that bad won’t be bad forever,

and what is good can sometimes last  a long, long time. ”

note: while this film is animated, it may be too emotional and scary for young children to experience, due to some of the characters and issues addressed within.

“without debate, without criticism

no administration and no country can succeed

and no republic can survive.”