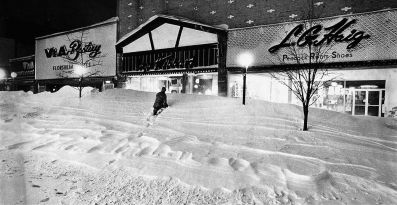 the great blizzards and a birthday – michigan history!

today is the anniversary of two of michigan’s greatest blizzards.

also on this date

my brother scott, was born in 1965 under clear skies.

The 1965 birthday. Scott was born, he was cute, and I wanted to bring him in for show and tell, but my mom refused and made me bring a picture, which I was really mad about. He did not like shoveling snow, but he did enjoy playing in it, sledding on our school hill at recess, and throwing it at us.

The 1967 storm. The big Blizzard went down as one of the all-time worst blizzards in Michigan’s history mainly because of the way the weather conditions quickly changed drastically and people were caught off guard. In the days leading up to the blizzard, some areas had temps in the 60s, quickly plummeted, and the skies dumped 1 1/2 feet of snow in a very short time.

The 1978 storm. Snowfalls for the entire storm included a whopping 30 inches in some Michigan locations. There were already 4 to 6 feet of snow on the ground before the storm started, and there were many drifts of over 15 feet.

In both storms there were wind gusts up to 65 MPH and both had several periods of thunderstorms with the snow, (thunder-snow).So far there has not been a storm that has come close to the intensity of either of the storms since 1978.  My brother still enjoys playing in the snow and celebrating his birthday. And I’m glad for all of this.

“apparently there is nothing that cannot happen today.’