how many grandies (and one hoverboard) does it take

to help me carry all of my leftovers home?

that I am bringing home too much food.

“leftovers in their less visible form are called memories.

stored in the refrigerator of the mind and the cupboard of the heart.”

“gratitude is the inward feeling of kindness received.

thankfulness is the natural impulse to express that feeling.

thanksgiving is the following of that impulse.”

happy thanksgiving and much gratitude to all

with the big holiday looming

don’t spend a minute worrying about

what to do with all the leftovers

the solution is just waiting for you to discover

what’s the weirdest jello recipe you’ve ever been served?

a side dish of the main meal?

but it is always there at the end, waiting.”

this family of turkeys behind the line at the parade

may or may not realize

that they have actually become a part of the parade.

“in general, costumes are the first thing in life

that let other people know who we are.

they indicate who the person is without saying anything.”

“this is the power of gathering:

it inspires us, delightfully, to be more hopeful, more joyful, more thoughtful: 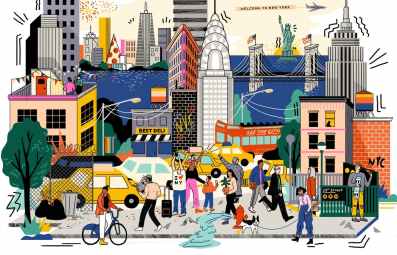 traveling with the family to nyc

to spend some quality holiday time

maybe it will be

if no one else has the same idea.

“one can’t paint New York as it is, but rather as it is felt.”

The first major sociological study of Thanksgiving appeared in the Journal of Consumer Research in 1991. The authors conducted in-depth interviews with people about their experiences of the holiday.

They also had 100 students take detailed fieldnotes on their Thanksgiving celebrations, supplemented by photographs. The data analysis revealed some common events in the fieldnotes that people rarely remarked on in the interviews. Here are some Thanksgiving rituals you might not realize are rituals:

1. THE GIVING OF THE JOB ADVICE
Teenagers are given a ritual status shift to the adult part of the family, not only through the move from the kids’ table to the grownup table, but also through the career counseling spontaneously offered by aunts, uncles, and anyone else with wisdom to share.

2. THE FORGETTING OF THE INGREDIENT
Oh no! I forgot to put the evaporated milk in the pumpkin pie! As the authors of the Thanksgiving study state, “since there is no written liturgy to insure exact replication each year, sometimes things are forgotten.” In the ritual pattern, the forgetting is followed by lamentation, reassurance, acceptance, and the restoration of comfortable stability. It reinforces the themes of abundance (we’ve got plenty even if not everything works out) and family togetherness (we can overcome obstacles).

3. THE TELLING OF DISASTER STORIES OF THANKSGIVINGS PAST
Remember that time we cooked a green bean casserole and burned the house down? Another way to reinforce the theme of family togetherness is to retell the stories of things that have gone wrong at Thanksgiving and then laugh about them. This ritual can turn ugly, however, if not everyone has gotten to the point where they find the disaster stories funny.

4. THE REAPPROPRIATION OF THE STORE-BOUGHT ITEMS
Transfer a store-bought pie crust to a bigger pan, filling out the extra space with pieces of another store-bought pie crust, and it’s not quite so pre-manufactured anymore. Put pineapple chunks in the Jello, and it becomes something done “our way.” The theme of the importance of the “homemade” emerges in the ritual of slightly changing the convenience foods to make them less convenient.

5. THE PET’S MEAL
The pet is fed special food while everyone looks on and takes photos. This ritual enacts the theme of inclusion also involved in the inviting of those with “nowhere else to go.”

6. THE PUTTING AWAY OF THE LEFTOVERS
In some cultures, feasts are followed by a ritual destruction of the surplus. At Thanksgiving the Puritan value of frugality is embodied in the wrapping and packing up of all the leftovers.

7. THE WALKING
After the eating and the groaning and the belly patting, someone will suggest a walk and a group will form to take a stroll. Sometimes the walkers will simply do laps around the house, but they often head out into the world to get some air. There is usually no destination involved, just a desire to move and feel the satisfied quietness of abundance – and to make some room for dessert.