a piece of driftwood

and while i’m a fan of natural found materials

i was not really motivated to spend $39.99 on this

but i do now have an idea for my summer job –

“i imagined your stick, washing in the waves for hundreds of years,

i imagined a little girl finding it on a beach so many years later.

saving it on her shelf,

where she put the things that made her feel like the world was magical.”

Shoppers were joined by an unexpected patron Friday when a female white-tailed deer wandered into the Dollar General store in Jackson, Michigan.

“I was shopping and I heard a commotion coming from the front of the store,” said Connie MacGuinness, a customer in the store at the time. “I heard people calling out ‘Oh no!” MacGuinness turned around to see the deer walking straight toward her down the aisle, she said. “I was stunned for a quick minute, then got out my phone.”

A report of the animal’s escapades reached the Jackson Police Department. Police and Fire Services Director Elmer Hitt said within a few minutes, officers from JPD and Jackson County Animal Control arrived to help lead the doe back out of the store. “It seemed as scared as we were, but it didn’t run around or seem upset,” MacGuinness said.

Another shopper told MacGuinness they saw the deer walk into the store through the open sliding door at the front of the building.The deer was in the building for about 20 minutes before police guided it outside an open door by barricading the aisles with boxes and carts.

*note: my personal theory is that rudolph had a lot of shopping to do,

hoped to beat the black friday crowd in november,

wanted to fly under the radar, and stock up on some good deals.

unfortunately rudolph is now such a celebrity

that it’s hard to be out in public

without being noticed and posted about on social media. – beth

“i’m like rudolph the red-nosed reindeer. if i’m not ready, the sled isn’t going to go. 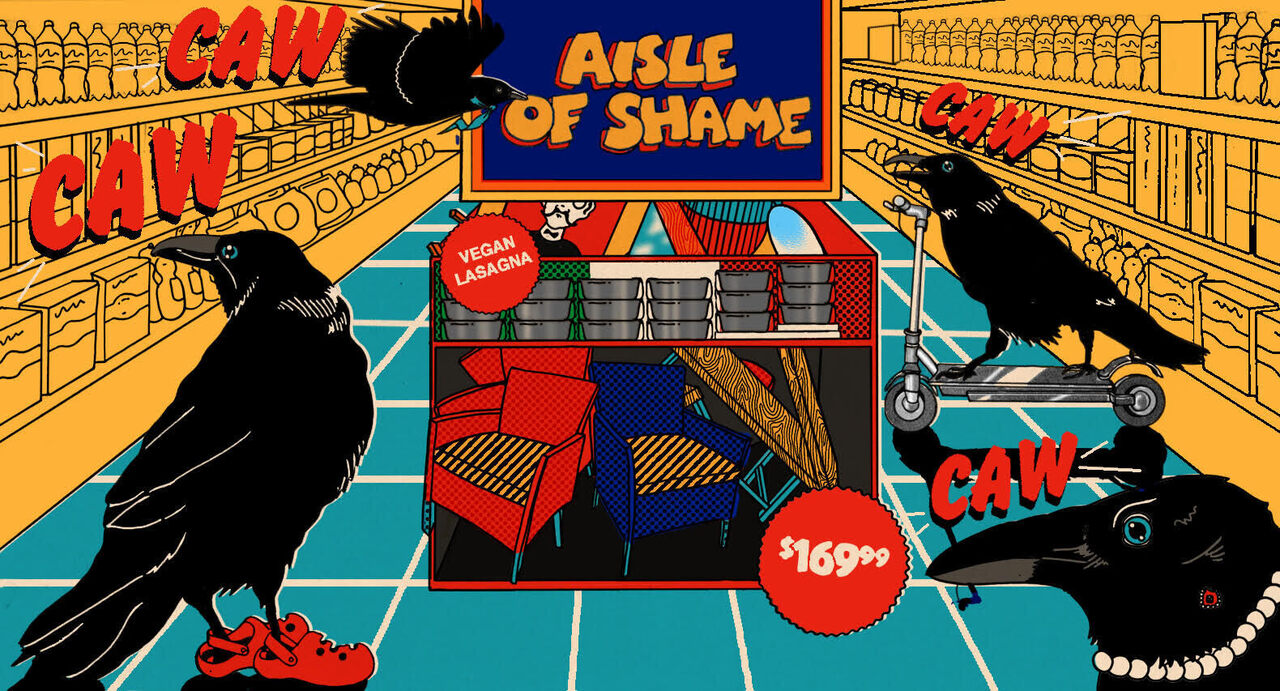 meet the proud shoppers of aldi’s ‘aisle of shame.’ this aisle has its own subculture and fan club.
(the ‘caw’ sound you may hear is one fan calling to another)

The “Aisle of Shame” is the unofficial name Aldi enthusiasts have given the store’s middle aisle, home to a weekly rotation of curious edible and non-edible products available only while supplies last. We’re talking everything from vegan lasagna made from lentils to a churro maker and apple cinnamon latte-flavored dog biscuits. The recipe for the Aisle of Shame’s surprising cult status combines the joy of a bargain, the thrill of discovery, the allure of the unusual, and the satisfaction of snapping up a limited-time offer.

“It’s something that you can use to express yourself and add fun and joy to your grocery shopping,” says enthusiastic  shopper Brenna Bazemore of its odd assortment of products. “I hate grocery shopping, but I love to go to Aldi and shop, because I know I’m at least going to get something that I can use outside of food and that’s always exciting to me.”

Plus, she can share her excitement with a million other AOS fans in the Facebook group where members share more than recipes, reviews, and Insta-worthy pics. With an evolving lingo, hashtag trends, and a propensity for random acts of kindness, the Aisle of Shame community is a unique food culture inspired by a grocery store. The Aisle of Shame’s edible advent calendars contain beer, cheese, and more. “It started as a fan group and it has become so much more,” writes Stefanie Fleming, the creator of the  Aisle of Shame website and Facebook group.

While each week’s AOS items can often seem like a compilation of randomness, a method exists. Since Aldi keeps prices low by stocking about 1,400 products (mostly staples) compared to a conventional grocery store’s 40,000, the AOS introduces more excitement and variety for shoppers. The aisle, which each week is split 50-50 between edible and non-edible items, often has a theme, whether seasonal (pumpkin foods in the fall; pool products in the summer) or regional (many AOS enthusiasts plan meals of schnitzel, spätzle, and strudel around the aisle’s German Week). Nils Brandes, a retail consultant who has co-written a book on Aldi’s business strategies, estimates that 20 percent of all yearly sales come from these products.

The Aisle of Shame is also where the grocers test new products to gauge their popularity—the vegetarian and vegan Earth Grown and gluten-free LiveGfree product lines, for instance, advanced from the AOS to the main aisles. “It’s crazy to think this is a grocery-store community,” Bazemore says.

After some thought, McKillip observes that Aldi shoppers might be more down-to-earth, their need to make a dollar stretch giving them both a healthier perspective about the products and more joy when they have room in their carts and budgets for the AOS’s more quirky products. Ultimately, though, she offers a simpler explanation: “It’s fun.”

“you’ve got bad eating habits if you use a grocery cart in 7-eleven.”

while shopping at target recently

i found myself in a long, slow, self-checkout line

behind a family of three-

a tired after a long day looking mother

and a high-energy young son

who was clearly bored and restless.

needing to create something to do

somehow found a way to

push his head through the middle of the skeleton wreath

that they were waiting to purchase.

due to the crazy universal law of

‘on is easier than off’

he could not get it

back over his head to take it off again.

first he tried to get it off himself,

then his sister joined in,

when she heard his yelping

mom turned around, sighed, put her things down, and proceeded to help

looking at her wits end

continuing to struggle with the skeleton wreath removal project.

when they finally were in the front

and deal with getting it off after they purchased it

she got the go ahead, scanned it on his neck, along with all her other items

and moved out of line.

employees quickly jumped in to help

with one holding his ears flat,

another tilting the wreath in a variety of positions,

his mother putting lotion on his face

moving his head up and down,

and his sister trying to keep him calm.

mom quietly pushed her cart out of the store

her son carrying the wreath

his sister holding his hand

looking like they were all more than ready to head home.

“there is no panic like the panic when you momentarily feel

when you get your hand or head stuck in something.”

so much going on

to shop anywhere else

none really appeal to me

maybe because i’m in the

maybe it’s something else.

“marketing is too important to be left to the marketing department.”

“organizing is what you do before you do something, so that when you do it, it is not all mixed up.”

as i was scanning my groceries

in the self-checkout line

this unusual impulse-buy display was sitting next to me

a combo of giant candy bars and mini bottles of tequila

someone thought this marketing idea

would be a good fit for the market

the perfect mix to send you on your way and start your day off right!

at last, at long last

after many days of waiting

with no pending arrival date

my glitter shoes have arrived

“a little glitter can turn your whole day around.”

when reading the day’s news online

there were the expected headlines/updates/graphs:

to wear a mask or not?

and then in huge letters:

why is this a story?

why is this a bigger-font-size-worthy story?

what is the story?

here’s the story and it’s an odd logic.:

The past few months have been chaotic for Costco customers, with product shortages, long lines and the temporary elimination of free food samples. Now, it appears there’s another change for devoted shoppers: Costco has eliminated the iconic half-sheet cakes that are the centerpiece of graduation and birthday parties.

Costco has quietly stopped selling the $20 half-sheet cakes across its US stores for the past month, instead pointing people toward its 10-inch round cakes and other assorted baked goods.

“To help limit personal contact and create more space for social distancing, Costco has reduced service in some departments,” the company explained to outraged customers on its Facebook account.

Costco confirmed to CNN Business it’s not selling the half-sheet cakes anymore and it has “no immediate plans” to bring it back. A spokesperson added that its 10-inch round cakes “seem to be resonating with our members.”

The decision also coincides with a recommendation from several US states and health agencies to avoid or prohibit large gatherings in light of Covid-19. Half-sheet cakes feeds around 50 people, while its 10-inch round cake serves around a dozen.

my interpretation: apparently the thought is that if you don’t have a big cake, you will not have a big celebration, where people will gather around the big cake in a big group. if you have more pieces of cake, you will then invite more people to go with it. what if you just bought a few round cakes, couldn’t you invite the same amount of people and just cut from the round cakes, or would that discourage you from inviting more guests as you’d have to then open more than one box? what about people just deciding to socially distance themselves without the cake being the deciding factor? just wondering, or is this that devil math at play once again? does it come down to having to match ratios, person to piece, and not have any leftover cake to eat for breakfast? i  knew i should have listened in school.

If you have a cake in front of you, you should not look any further for joy!”

there would be signs

and then the added category of

the gateway into a peppermint patty?

seems like it should be the other way around.

what’s the cutoff age to qualify to eat adult candy?

is it humiliating if you’re an adult and are seen eating the kid’s candy?

is it open season to eat the bars and all ages are welcome?

do you have to get someone to buy for you

if you don’t look the proper age?

do they see it as marketing to 3 different groups

all in one aisle?

who sorts them and decides which is suited for which?

I like to live on the edge and went with the rollos.