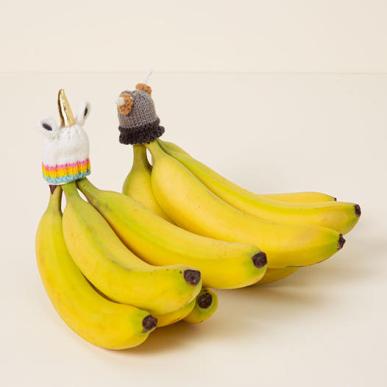 Sure, you could freeze those overripe bananas for bread or smoothies.

But wouldn’t it be nice if they just stayed yellow longer?

That is, a hat designed to preserve your favorite tropical treat.

This one’s a two-parter: First, place the silicone cap over the crown (where the bananas connect) to slow the absorption of ethylene gas, which is what causes them to turn brown. Second, place the cute knit hat over the silicone one (they secure with magnets). Unicorn and viking or watermelon and pineapple? The choice is yours. Then, voilà! Bananas stay fresh longer—and look great while doing it. Which means you’ll waste less food and money. Yep, all that from a little hat. Made in California. ($25.00 from Uncommon Goods)

what’s the most unusual ‘kitchen tool’ you’ve ever purchased?

“i’m getting so old, i don’t even buy green bananas anymore.”

as a wonderful gift

i (aka peaches) was elated

but right from the beginning

every time i used it

my fingers would somehow end up sliced

everyone i asked who had one

said this had never happened to them

and it was obvious to me

that the ninja was winning.

in my own ninja counter move

i have decided to pass him on

to another potential victim

with the user’s manual, a box of ‘my little pony’ bandaids,

and a wish to both of them for the best of luck.

*tangent: during this saga, i was reminded of the pink panther movies

where peter sellers and his manservant/ninja, cato

were constantly battling in surprise situations

in an effort to keep inspector clouseau in top form.

*Cato Fong is Clouseau’s Chinese manservant, trained to attack him regularly to keep him alert and skilled in martial arts. Cato and Clouseau have a love-hate relationship, with their fights being long and vicious, as well as destructive to the furniture, and always interupted by the telephone ringing, at which point they will become civil again. Cato puts a lot of effort into taking his employer by surprise, and Clouseau never really feels safe as Cato will stop at nothing. A running gag is Cato attacking Clouseau during a romantic moment, or else Clouseau going away and Cato transforming the apartment.

“only a ninja can stop a ninja”

a dozen adults plus teenagers, toddlers, babies and dogs

all in one kitchen

end up with a perfect meal?

m and j actively working on their teamwork skills

as the fine web

“in the long history of humankind…

those who learned to collaborate and improvise most effectively have prevailed.”

i wrote about my world of baking.

you can see a bit of where the magic happens.

a good bottle of red,

hearts of all sizes,

are sometimes a part of the kitchen experience.

I do like to cook; I’m sort of a mad scientist in the kitchen.
Kyle Chandler