“i love walking down the street and seeing faces

and drama and happiness and sadness and dirt and cleanliness.”

to expose the cats to a bit of world geography

while sipping a refreshing drink.

so far they have refused to take any quizzes

but i’m confident they are learning by osmosis.

the most compelling, wrenching, and heartfelt testimony

i have ever witnessed

not one person immune from tears

i could not take my eyes off of them

and I am forever changed

questions must be answered and justice served

“that’s the thing about pain, it demands to be felt.” – john green

No one really knows how these old hobby horses got here, but the herd keeps growing. 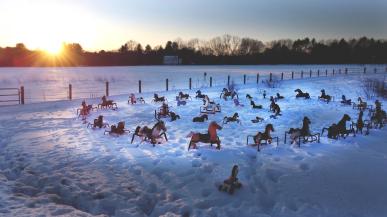 ON A SMALL SLICE OF wide-open pasture in the town of Lincoln, Massachusetts, broken-down rocking horses, plastic ponies, metal ponies, and other assorted horse toys have been holding court. As if by magic, ponies have been proliferating along this winding country road, resulting in the peculiar “Ponyhenge.”

The horses started arriving anonymously sometime in 2010, with the placement of a lone hobby horse along picturesque Old Sudbury Road, about 15 miles west of Boston. How and why the rusty little fellow appeared is a mystery, even to Lincolnites who’ve been around a while. One story has the first horse hanging around after a kid’s short-lived lemonade stand, another that he was left over from a Christmas display.

Whatever the real story might be, after the first one appeared things started to get strange. More horses—hobby horses, rocking horses, and horse figurines—began appearing at the site. They are periodically rearranged, sometimes in a circle, sometimes in rows like race horses. Other times they are simply scattered and knocked around, as if they’ve come back from a long night of carousing.

The herd has been growing faster of late, with twice as many horses put out to pasture as there were a couple of years ago. Oddly, no one takes them away—the arrangement only morphs and grows, much to the delight of the family that owns the land. As the owner told the Boston Globe in 2015, “There was something lovely about it being anonymous, and now every time we go away, another one appears.”

While it’s on privately owned land, Ponyhenge is open to anyone who wants to visit.

“they swayed about upon a rocking horse. and thought it pegasus.” 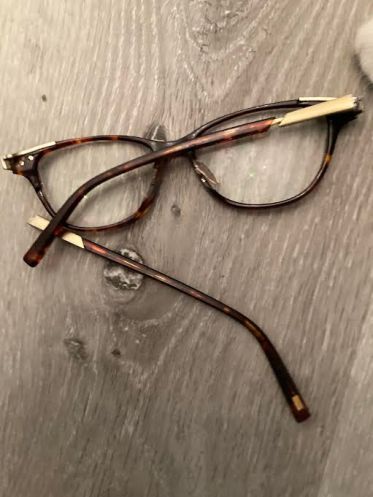 had one of those days a couple of weeks ago

dropped off my car for an expensive repair

apparently in the middle of the road

where they got run over

went home and sat on my couch in time to see

who said the company that made my frames had been sold

found a pair of the lenses online while squinting

now i await their arrival

as i track them all over the country

traveling in a bit of an illogical order

can’t wait to see where they land next

hopefully on my face.

Tracking my package so far: 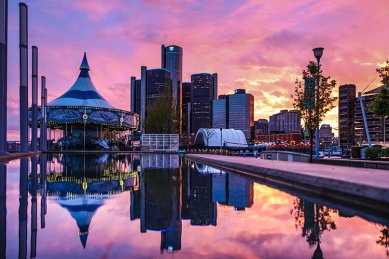 “there are cities that get by on their good looks, offer climate and scenery, views of mountains or oceans, rockbound or with palm trees. and there are cities like detroit that have to work for a living.”

*note – (elmore was a prolific american author/screenwriter who lived in the detroit area, where i grew up.

my father resembled elmore in his later years, was frequently mistaken for him,

and signed autographs upon request)

one of the classic olympic sports

my occupation at present

50th anniversary of the week of the Apollo 11 moon landing

on the cusp of everything

to my parents’ friends’ house

all gathered around the tv

as the first man walked on the moon

spoke his first words on the moon

lots of emotion in the house

I ran to the window to look at the moon

hoping I would see him up there

right in the middle of all of this

left to go to the hospital

to have her baby

she named him neil

after that man on the moon.