“a lifetime of training for just ten seconds.”

“the only victory that counts is the one over yourself”

Credits to whom appropriate

one of the classic olympic sports

—
the U.S. women’s hockey team pulls off their own miracle

at 2018 Winter Olympics by beating Canada in a shootout for the gold medal.
—

“if you don’t try to win you might as well

hold the olympics in somebody’s back yard.”

“olympics for me is love, peace, united. “

librarians have an olympics, too
brains met brawn in a bookish competition for the ages

think the athletic action is all in rio this year? you’d be wrong—dead wrong. though you might not think so, librarians perform feats of near-olympian prowess every day as they lug books back and forth, tame tortuous piles of information and sustain long hours and complicated reference requests. and as librarian katy kelly writes, they proved it in the university of dayton’s first-ever library olympics last week.

the “olympic” event showcased the prowess of librarians by turning the mental into the physical. it’s an olympics year tradition in many libraries that aims to get people more engaged with their local library. some libraries invite the public into the library to compete in fun, bookish games, but in this case librarians themselves faced off in what may be the ultimate game of reference skill and cataloging competence. 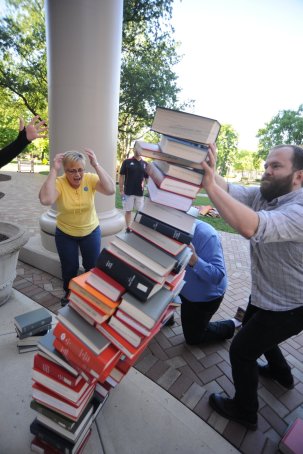 librarians competed in a vigorous game of “journal jenga” (stacking bound periodicals as high as possible and jumping out of the way when they collapsed. then they faced off in a circuit of different events, including balancing bound journals on their heads, running a book cart through a twisty course, and tossing journals toward a target. (all of those thrown journals were slated for recycling in a process librarians call “weeding.”)

brains had a place next to all that brawn, too, as librarians participated in a tricky speed sorting event in which they had to put books in order by their library of congress call number. to top it all off, they ran around campus finding objects that corresponded to different lo  call numbers. the winning team made off with the medal by a single point.
all of these antics sound silly, but librarian m. schlangen, who participated in the event, found deeper meaning in the exercise. “as I raced to put a cart full of books in order by the library of congress call numbers on their spine labels,” she wrote, “the very genius of this system occurred to me: without orderly cataloging of the world’s knowledge, even in this age of search engines and high-speed networks, information could easily be rendered obscure in an ocean of data, accessed by mere chance rather than intention.”

there’s another purpose for the games: as the university of dayton’s m. scheffler and a. black note, these olympics-like competitions don’t just test librarians’ knowledge, but highlight areas in which they might need more training. and the best librarians know that, like the most competitive athletes in the world, it never hurts to brush up on the basics. 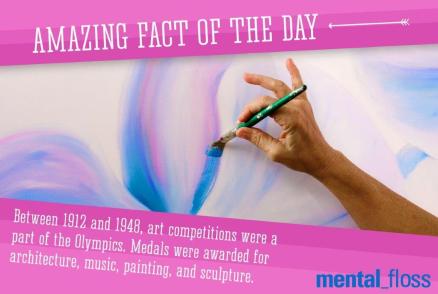 olympism is the marriage of sport and culture.
– juan antonio samaranch