Inspired by the nature around her, artist Katie Holten recently developed the New York City Tree Alphabet. Each letter is represented by an illustration of a different type of tree found in NYC. The letter A, for example is depicted as an ash tree, and the letter O is illustrated as an oak.

Holten is one of the first creatives to become an NYC Parks artist-in-residence, where she was asked to explore “the intersection of art, urban ecology, sustainability, nature, and design.” Holten’s resulting NYC Trees font is now available as a free download to anyone who wants to write secret messages in tree code. Not only that, but the NYC Parks Department plans to actually plant some of the messages as real trees in parks and other public spaces.

“Being an artist-in-residence with Parks meant that I could create a ‘real’ tree alphabet. When I say real, I mean legitimate, sanctioned, approved by the city,” Holten explains. “Often, this is exactly what you don’t want with/for an artwork! But in this case, because I really feel the project is a public service—providing a tool that people can use to interact with public space in a whole new way—it needed to be truthful and practical. It had to be something we could actually plant and that the city supported.”

Holten is currently accepting message submissions via her website. From poems to love letters, you can test out how your words would look as trees using the “Write with Trees” function on her homepage. “Right now, we’re leaving it completely wide open, so we’ve no idea what messages we’ll be planting. I’m excited to see what people send us,” Holten writes. “People have been suggesting words like ‘Dream,’ ‘Hope,’ and ‘Peace.’ But we’re also receiving longer messages, love letters, poems, and short stories. We’re curious to see how we could translate a long text into a grove of planted trees. It’s an exciting challenge and we can make up the rules as we go along, so anything could happen.”

Do you have a message you’d like to translate into your own custom forest? Planting begins in April 2019 in New York City. Download the font for free and check out Holten’s website for more details on the project.

Artist Katie Holten developed the New York City Tree Alphabet—each letter is represented by an illustration of a different type of tree. 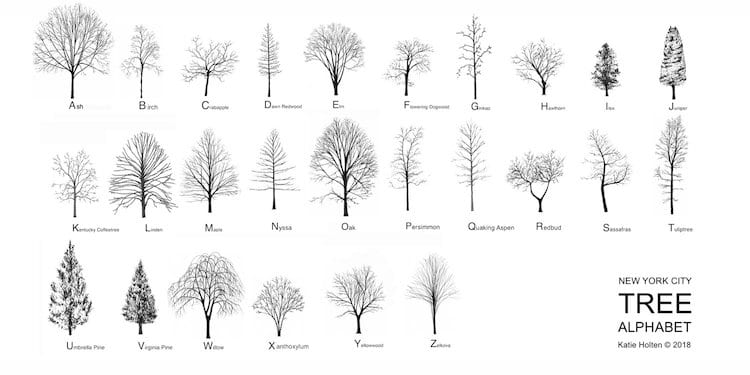 “i think that I shall never see a poem lovely as a tree.”
-joyce kilmer
—