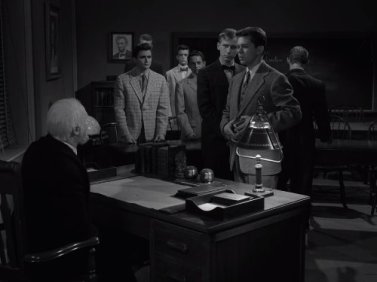 OPENING: Professor Ellis Fowler, a gentle, bookish guide to the young, who is about to discover that life still has certain surprises, and that the campus of the Rock Spring School for Boys lies on a direct path to another institution, commonly referred to as the Twilight Zone.

Professor Ellis Fowler is an elderly English literature teacher at the Rock Spring School, a boys’ prep school, who is forced into retirement after teaching for 51 years at the school. Looking through his old yearbooks and reminiscing about his former students, he becomes convinced that all of his lessons have been in vain and that he has accomplished nothing with his life.

Deeply depressed, he prepares to kill himself on the night of Christmas Eve next to a statue of the famous educator Horace Mann, with its quote “Be ashamed to die until you have won some victory for humanity.” Before he can follow through, however, he is called back to his classroom by a phantom bell, where he is visited by ghosts of several boys who were his students, all dead, several of whom died heroically.

The boys tell him of how he inspired them to become better men, and the difference he made in their lives. One posthumously received the Medal of Honor for actions at Iwo Jima; another died of leukemia after exposure to X-rays during research into cancer treatments; another died at Pearl Harbor after saving 12 other men. All were inspired by Fowler’s teachings. Moved to tears, Fowler hears the phantom bell again, and his former pupils disappear. Now accepting of his retirement, content that his life is fuller for having enriched the lives of the boys, he listens to his current students caroling outside his home.

Closing: Professor Ellis Fowler, teacher, who discovered rather belatedly something of his own value. A very small scholastic lesson, from the campus of the Twilight Zone.