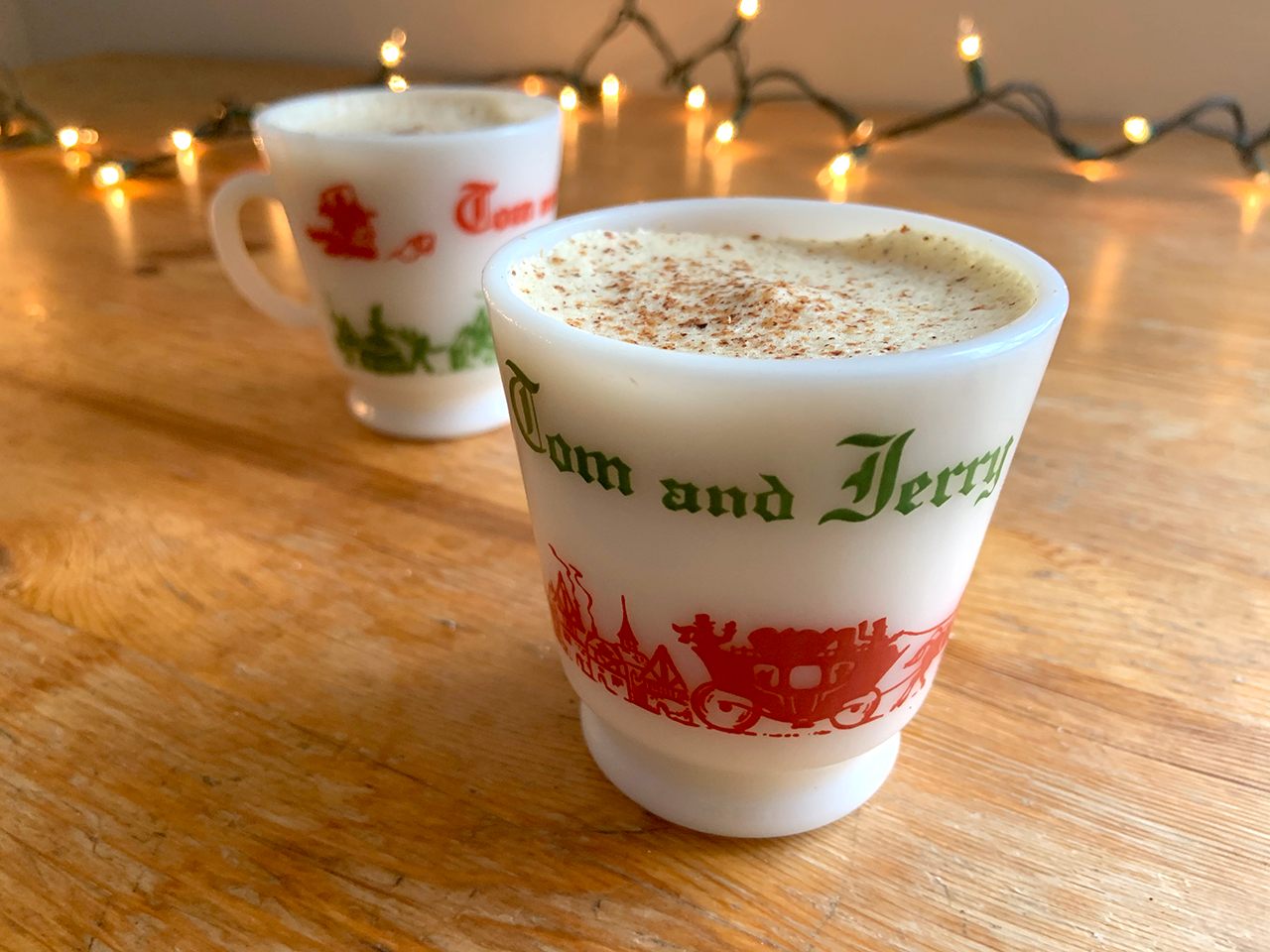 This 19th-century warm, hearty, and festive cocktail still fights cold nights in the Midwest.
IT’S NOT OFTEN ONE NEEDS to make a batter for a cocktail, but so it is with the Tom and Jerry, a Christmas party staple in the American Midwest. The drink begins with a frothy batter of separately beaten egg whites and yolks folded together and mixed with sugar and warm spices. When served as a party punch, the batter is often ladled out of special Tom and Jerry punch bowls into matching cocktail mugs, along with hot milk (or water), rum (or brandy), and a sprinkle of nutmeg. The result is a delicious, warm revamp of the classic eggnog.

The Tom and Jerry’s origins are frequently traced back to a publicity stunt orchestrated by British journalist, Pierce Egan. The story goes that he added brandy to eggnog to create a signature cocktail to promote his 1821 book, Life in London. A subsequent play based on the book, Tom and Jerry, or Life in London, has additionally been associated with the beverage. While this remains unverified, Egan’s work did make a meaningful contribution to the drinking world: the phrase “Tom and Jerrying” which means indulging in loud, drunken behavior.

No definitive records exist about the drink’s first appearance stateside, but in 1862, the famed New York bartender Jerry Thomas published a recipe for a Tom and Jerry in his book, “How to Mix Drinks, Or, The Bon-viant’s Companion.” (great title)

Historians are unclear as to why the Tom and Jerry became such a Christmas staple in the Midwestern United States, but it was popular enough to merit a cottage industry of Tom and Jerry drink sets, consisting of punch bowls and mugs inscribed with the drink’s name in Old English font. Milk glass Tom and Jerry sets were fairly common in the 1940s through the 60s. A New York Times article about the cocktail quotes author Jim Draeger, who surmised that the Tom and Jerry became a Wisconsin staple because the state has an affinity for brandy drinks, and is also a dairy state. Perhaps more than anything, the intense cold of the American Midwest has arguably solidified this warming drink’s staying power in the winter drinking traditions of the region.

note: we are currently dealing with blustery winds, blowing snow, white-outs, and single-digit – below zero temps, and i have always lived in the midwest (in michigan), but have never encountered or heard of this drink. any readers out there ever had this?

“heap on more wood – the wind is chill;

but let it whistle as it will,