The $50 cash prize along with a congratulatory note hidden in a locker on campus.
With every new college semester, students are faced with multiple syllabuses outlining the subjects in their classes. But do students read them thoroughly? One Tennessee professor put it to the test. Kenyon Wilson is the associate head of performing arts at the University of Tennessee at Chattanooga and decided to put an Easter egg in the syllabus for his music seminar class this past semester.
When Wilson put the reward in the locker, he left a note inside that read “Congrats! Please leave your name and date so I know who found it.” He was also sure to set the combination lock with a certain number in the noon position, to determine whether any students had tampered with the lock, but the combination was never even turned. “I had great hopes, and I’d be just as happy having this conversation if one of my students found it on the first week.” Wilson told CNN.
Wilson waited until final exams were done and the semester was over before checking the locker.
He revealed the unclaimed cash in a Facebook post. He said that students have been “good sports” about it. “I know my students read, and I don’t expect them to religiously go through word-by-word but if they did, I wanted to reward them.”
Haley Decker, a recent graduate from the university, took Wilson’s seminar-style class for the past 3 and a half years and was one of the students who failed to find the hidden cash this past semester. “I honestly thought it was hilarious. This class typically is the same format every semester, so students know what to expect and don’t take the time to read the syllabus like we should.”
Decker said she texted a group of friends that were in the class with her and everyone thought it was a clever move by Wilson. “I think this was a really smart experiment for Dr. Wilson to test out,” Decker said. “It definitely made the music students realize that despite repetitive information you should still read through your syllabus carefully.” The professor notes that it was all in good fun.
The hint read: “Thus (free to the first who claims; locker one hundred forty-seven; combination fifteen, twenty-five, thirty-five), students may be ineligible to make up classes and …” This would have led students to a locker that contained a $50 bill, free to the first student to claim it. But at the end of the semester, when he went to check the locker, the bill was still there.
“It an academic trope that no one reads the syllabus,” Wilson said. “It’s analogous to the terms and conditions when you’re installing software, everyone clicks that they’ve read it when no one ever does.” The class was made up of 71 students. Wilson said his syllabus typically doesn’t change much, but with Covid protocols there was some new information this time around. “There’s a standard boilerplate that doesn’t change. The university has us put a lot of legal stuff towards the end,” Wilson added. “But on the first day of class I told them there was stuff that had changed, and for them to make sure they read it.” 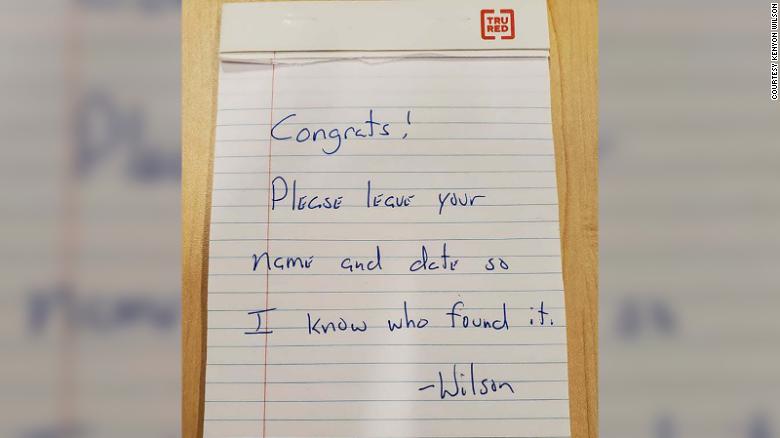 “i used to keep my college roommate from reading my personal email by hiding it in her textbooks.”
-joan welsh
—
story credits: Sara Smart, CNN