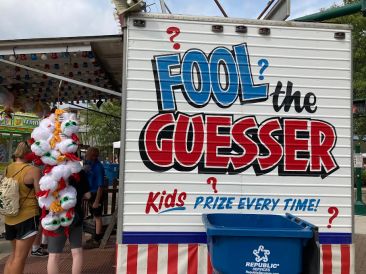 writing on his well-worn pad

then guessing out loud all day

he was a winner each and every time

amazing and flattering his crowd

even when he gave away a toy

what did the guesser have to lose? 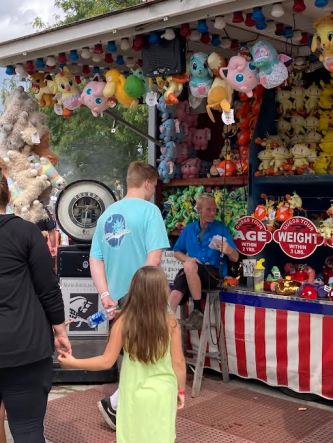 when you go to the carnival

and have finally grown enough

“the determination to win is the better part of winning.”

driving down the highway

i came upon this truck filled with fun

and wondered where exactly it was headed.

“i was sure that somewhere a grandiose carnival

was going on in the sky,

and I was missing it.”

what a birthday for grandie j

on an afternoon spent with family and friends at

imagine a mash-up of

you could never imagine.

it was a boy’s dream come true. 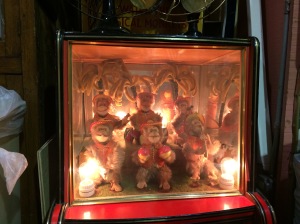 “once a person has all the things they need to live, everything else is entertainment.”
-neal stephenson

15 excellent bits of carnival slang to add to your vocabulary

even if you’ve never worked on a midway, you can still pepper your speech with delightfully authentic carnival jargon. start slipping these terms into conversation and watch as your friends bally about how great talking to you is.

1. Annie Oakley (noun): A meal ticket.
2. Bally (verb): To attract a crowd by making a great commotion about how terrific a show is.
3. Brodie (noun): A clumsy and spectacular fall. Named for Steve Brodie, a man who claimed to have survived a fall from the Brooklyn Bridge in 1886.
4. Charivari (noun): A cacophonous and chaotic entrance of clowns.
5. Charley (verb): To toss a stack of posters or playbills in the trash rather than giving them away as ordered.
6. Cherry pie (noun): Outside work performed by carnival employees for extra cash.
7. Clem (noun): A fight between carnival employees.
8. Duke (noun): A box lunch distributed to carnival staff.
9. Kinker (noun): Any performer, but originally intended for acrobats.
10. G-top (noun): Private employee tent for gambling.
11. Larry (adjective): Poorly made, worthless, bad (of items or souvenirs).
12. Lead joint (noun): Shooting gallery.
13. Reuben (noun): A rube or a gullible sap.
14. Scram-bag (noun): A bag packed for immediate use in case a quick departure is required.
15. Waxie (noun): A repairman

“carnies built this country, the carnival part of it anyway.”