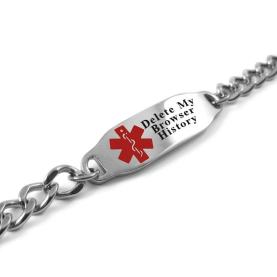 MyIdentityDoctor has created a handy “Delete My Browser History” medical alert bracelet to help make sure your questionable browsing habits are erased in case something unfortunate happens. keep this in mind when making your holiday gift lists. we all know someone who might be the perfect match for this gift!

on the eve of the big day tomorrow…

norma and  her therapy dog, ringo on the road.

Norma Bauerschmidt, who decided to take a cross-country RV trip instead of undergoing cancer treatment has died at the age of 91.

When 90-year-old Michigan native Norma Jean Bauerschmidt learned she had a large, likely cancerous mass on her uterus, she wasn’t going to waste any time with what she saw as debilitating treatment. Instead, she spent her final days experiencing as much of the world as she could.

Bauerschmidt, a native of Presque Isle, died in her motor home on San Juan Island, Wash., on Sept. 30 at the age of 91, but not before she’d traveled more than 13,000 miles in an RV, sleeping in 75 different locations in 32 states.

In that time, “Miss Norma” became in internet sensation, with more than 482,000 people following her travels via a Facebook page set up by her daughter titled “Driving Miss Norma.”

Bauerschmidt’s decision to refuse treatment was made just two days after her husband, Leo, passed away. While sitting in an OB/GYN office talking about treatment options, including surgery, radiation and chemotherapy, a doctor asked her how she would like to proceed.

According to Facebook, Bauerschmidt, a tiny woman at 101 pounds and under 5 feet tall, looked the young doctor dead in the eye and with the strongest voice she could muster, said, “I’m 90-years-old. I’m hitting the road.”

While on the road, Miss Norma experienced many things for the first time. Big things like riding in a hot air balloon or on a horse, to little things like getting a pedicure or having her first taste of key lime pie, oysters and fried green tomatoes.

She was hosted by the U.S. Navy, the Atlanta Hawks, the Georgia Aquarium and the towns of Winthrop, Mass., Marietta, Ga., and, according to her Facebook page, what felt like the entire state of South Carolina.

She began hospice care after arriving in the San Juan Island town of Friday Harbor in August, according to the Associated Press.

A celebration of Miss Norma’s life and a memorial tree planting is scheduled for Friday, Oct. 7 at 4:30 p.m. at Friday Harbor’s Overlook Park.

“Our families, friends, and the many thousands of former strangers have lifted us up and kept our spirits high,” a message from Miss Norma’s family reads on Facebook. “We continue to be overwhelmed by the kindness and love that has been directed our way.”

l takes a moment to ponder all that happened

and will soon be ready to move on.

never regret. if it is good, it’s wonderful. if its bad, it is experience.

don’t look back in regret. move forward with hope.