Over the years, reported sightings of the legendary — and mystical — Bigfoot have made headlines across the United States. He’s been spotted in parks and campsites by people who claim the giant Sasquatch is unlike anything they’ve ever seen before.

The legend of the beast has grown over the years as there are whole groups of people who search for Bigfoot and track his “known whereabouts.”

According to a new TV show, “In Search of Monsters,” Michigan is one of the top places to encounter Bigfoot as there have been 1,131 sightings reported in our state over the years. 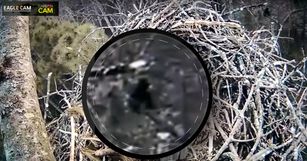 Did a Northern Michigan eagle cam catch a Bigfoot sighting? An unknown figure can be seen walking below the eagle’s nest at the Platte River State Fish Hatchery.

In a description of their findings, the show — which airs on the Travel Channel — says many of the reported sightings were near the Seney National Wildlife Refuge in the Upper Peninsula. They even describe a scenario where a woman claims Bigfoot walked up to her car and looked in while her baby was inside. She said there was a foul odor in the air and then she saw the massive creature.

In the fall of 2016, there were at least three reported sightings of Bigfoot in Michigan in the span of a few weeks. All of these occurred in the Upper Peninsula.

“the inclination to believe in the fantastic may strike some as a failure in logic, or gullibility, but it’s really a gift. a world that might have bigfoot and the loch ness monster is clearly superior to one that definitely does not.”

the wonderful legend of one of my very favorite plants.

kindness, compassion, and gratitude at play.

a glimpse into the real story behind the legend.

stays up all night

exactly when spring will arrive

when they wake him up

to bring him out

early in the morning

for his official prediction

“i’m so tired…i was up all night trying to round off infinity.”

“turn your face to the sun and the shadows fall behind you.”

may your face find the sun.

muhammad ali carries the weight of his son on his shoulders

“some are born great, some achieve greatness,

and some have greatness thrust upon them. “