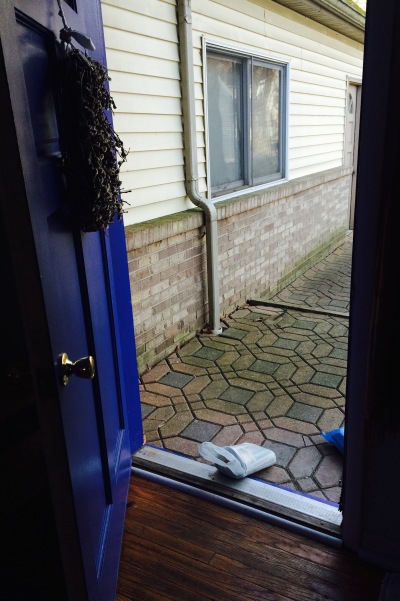 that i never see.

even when he is bad

throws it in a puddle on my driveway

on the hell strip near the street

somewhere in my garden

and his delivery service.

i love the newspaper

love to hold it in my hands

take my time reading it.

cut things out of it

for 3 weeks it was missing on thursdays

then i got 2 copies on the next thursday

but it was missing on that friday

then on a sunday

the three delivery days are:

they always credit me

but what i really want

is to just have it delivered

they are always kind

they never can figure out

the reason for the inconsistency.

my house has never moved.

it’s the same 3 day schedule it’s been for 2 years.

comes up in the morning

sets in the evening.

is there something i’m missing?

just got a handwritten note from my newspaper deliveryman. he said he is ‘quitting the route to move on to something else’,  but that he’s enjoyed our years together. it’s all so sudden, and we have had such a rocky history, but i will miss our odd give and take.
even though we never met each other, we’ve had many interactions over the years. because he is a man, and not a boy, he delivers from his car, early morning, and our ships pass each other in the night. he’s an interesting delivery guy, seems a bit on the lazy or crazy side, and i’d love to know his story.
each morning, while it is still dark out, he drives by to deliver the paper. when delivering, he inevitably is a lazy/bad shot and tosses my paper to the end of my driveway where it slopes and collects water, snow, and whatever other debris that nature has chosen to deposit there.  i’ve emailed and called the paper various times to have them ask him to please just throw it closer to the house, or out of the water zone, etc.  his response time and again, has been to wrap the paper better and throw it 8-12 inches further up the drive.(i have done my mathematical calculations, and have figured out that by the time the next decade rolls around, it should be somewhat close to my house.)  he keeps this up for around 2 weeks generally, and then it’s back to the end of the driveway. one time, he actually drove further up the driveway and threw the paper, but backed into my wooden garden border on the way out, so he must have decided it wasn’t worth the high level of risk involved.
there are other times when he’s failed to deliver, or delivered late, and the local manager has had to deliver it himself or i’ve been credited, or he’s said that because there were so many ads, and it took him a long time to put it all together. it was always something with him, but i never gave up hope that over time, he would master the process. (plus he was the only one who delivered the paper in my area.)
even after all of this, one of our most memorable experiences has to have been the time i heard an early morning crash in front of my house. my first thought was that i had my car that i was selling parked out front and that the paperman was probably the only one out at that time of day. i soon saw blue flashing lights and answered a knock on my door. it was the police telling me that my paperman had rammed into my car, and that he was calling his paper to get advice. they said he was driving on the wrong side of the road, so that he could deliver the papers and had slammed into my car. now, a few questions went through my head – like why he didn’t notice a car in right in front of him?, was he still out partying from the night before?, etc.
we looked across the dark, towards each other, and that is the closet we ever came to meeting. i called his paper, who agreed to pay for repairs and a rental car. he continued to be my paperman, and each christmas he’d enclose a card in one of the papers, wishing me a happy holiday, thanking me for my business, and enclosing a self-addressed envelope.  i’d always tipped him by mail when getting a bill, and at christmas i’d send him a bonus, as he’d grown on me after all these years, and in spite of his beyond horrible delivery style. and now, it is all over, with just a letter. it ended as suddenly as it all began. i will do my best to move on and i wonder what he has chosen to move on to.

‘If there was no Black Sabbath, I could still possibly be a morning newspaper delivery boy. ‘ – Lars Ulrich